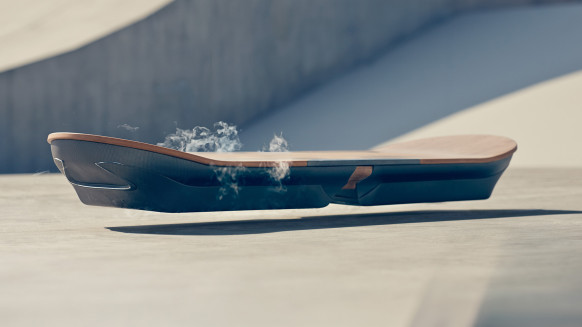 There probably hasn’t been any other device in the whole history of science fiction movies that made the geeks go nuts than the hoverboard. You do remember “Back to future II”, right? Everything about the hoverboard remained just a very basic concept, that is until Lexus decided to release a teaser that was going to rock everybody’s world. While in about 20 years we went from basic, brick size (and weight) phones to iPhone 6 and Samsung Galaxy S6, only few improvements were made to skateboards, mostly by adding a small electric engine.

Lexus kept many, many fans under extreme pressure by not revealing any extra information about the hoverboard, except for the teaser which I for one viewed at least 100 times. Now, everything has been taken to a whole new level, as Lexus allowed for the first test of their hoverboard, in Barcelona. With skepticism in mind but also filled with excitement, Robb Holland from Jalopnik was flewn by Lexus to Barcelona in order to be the one to test the frictionless board. Although it went pretty bad at first, since Robb wasn’t really used to it, things improved as he continued to hover on the skateboard track. The Lexus hoverboard is a fantasy that came true.

While it definitely looks very tricky, Lexus engineers and scientists used already existing technology in order to develop the hoverboard. It is based on the properties of supercooled superconductors. At very low temperatures, superconductors develop strong magnetic fields which act in a predictable way, creating a frictionless barrier between the board and the ground. Still, is this the Marty McFly’s hoverboard we waited for? It is not, at least for the moment. The hoverboard requires constant liquid nitrogen filling and, in order to use it in your local skate-park you would first ensure that the park is filled with a few hundreds of dollars worth of magnets; otherwise, there’s no magnetic field and thus no hovering.

However, a strong point lasts; Lexus made a huge step forward in providing not stylish vehicles as we were used to, but also pushing the boundaries of technology. The hoverboard might not hit the shelves today, but it will definitely be an option in the future, and we can’t wait to get it.

Tiffany & Co. is entering the world of NFTs

David Beckham takes out daughter to The Weeknd Concert