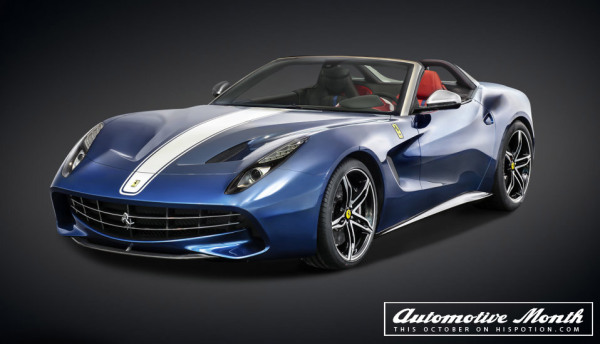 [adsense300gray]Ferrari just celebrated 60 years since they began selling cars on American soil, and to top all off they decided to unveil the F60 America this past weekend , a super-roadster based on the platform of F12 Berlinetta and offered exclusively to American customers. The engine and technical specs remain the same, so you get a “standard” 6.3-liter V12 delivering 740  horsepower  to the rear wheels and 690 Nm via an automatic 7-speed dual-clutch transmission that launches from 0 to 60 miles per hour in 3 seconds. Just like in previous special editions that Ferrari gave the USA (275 GTS-4 NART 1967, Daytona Spyder GTS4 365 1969, or 575M Superamerica),  the F60 ditches the roof (Italians understood that Americans like convertibles) and also receives the American flag stamped on the bodywork. Being a special edition the car will be very exclusive, and expensive. Ferrari will make only 10 cars at a price of 2.5 million dollars. That doesn’t mean that they had any problem finding buyers. Yes, they already sold all the units.