This post brought to you by The Chevy Silverado. The content and opinions expressed below are that of HisPotion – Smart Stuff for Men.

The other day I was asking myself if I could define my childhood using just one word, be it simple or complex, having this curiosity wandering in my mind as I was asked by my son about my life back then. The answer to that is no. I admit, there are plenty words to decide from; I was a happy kid, living life in my parents’ house, eating my mother’s dinner and feeding myself up on my father’s wisdom. One doesn’t have to sum up such a beautiful period using mere words, but should define it with experiences.  And one of those experiences that I will never forget was when I had to make a choice between jumping off a cliff and into the river flowing in my hometown because of a challenge laid by my best friend back then.

I accepted the challenge. I didn’t want to look bad in front of my friends, so I took my clothes off and prepared myself for the jump. At the very last second I realized something was just not right, so I found the strength to stop. My friend with the proposal said that he would do it no matter what, as he wanted to show who the real man between the two of us is. No need to say he got a pretty bad head injury and doctors said that his complete recovery was a miracle. I never teased him with any “I told you so” but I understood that safety comes first, no matter what. You need to be on the brink of doing the bad thing, when a voice – name however you want, consciousness, guarding angel – will talk inside your head telling you not to.

This is what came to mind when I saw what Chevrolet proposed to ten men inside a material testing facility where they were asked to make the smartest decision in a matter of seconds. The time needed to reach a conclusion of such importance and take action on it only takes about tens of milliseconds.

At first, they were presented with two different cages, one made of steel and the other made of aluminum. They were given time to examine both and test their resilience. Next thing you know, a 700lbs bear shows up threatening to maul each and every one of them, and that is when they had to make the decision of which cage to hide behind. Make no secret of it, everybody, one after another, chose the steel cage, and who can blame them? Had I been in there, I would have chosen steel too. Now, come on, one has to be true to itself, so be honest, you would have done the very same. Steel is about raw strength, about endurance, about manliness.

Remember, safety comes first. Nobody took it as the cage that it was, but as a fortress. The exact things can be said about the new Chevrolet Silverado – people, the Chevy Silverado is a real force of nature. It gives you what you need: stability, hardness, and straight compatibility with your inner strength, raging to be unleashed. Should you look for dependability, you came to the right place. Have no second thoughts that the Chevy Silverado is the perfect answer to questions like:

– Which truck will ensure me safety?

The cages test is more than what it looks like. Look beyond the bars to find that its real meaning is the understanding that a single bad decision can put everything at risk. And remember, someone is waiting for you at home, so don’t gamble with your safety. Stay smart, pick a Chevy Silverado. Silverado Films Share your experiences and your own bear reaction photo on Twitter at @ChevyTrucks and don’t forget to #SilveradoStrong. 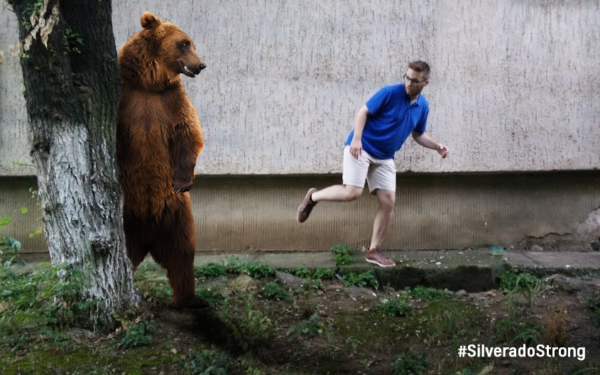 National Parks In The US You Don’t Want To Miss

Life of a Modern Young Person Is Impossible Without These Gadgets